Sometimes it’s easy to see why a product is moving in a certain direction. Maybe it’s a brand redesign or a strategic response to a competitor - or these days COVID. Or it could be a simple fix for something that is frustrating users, a little bit of confusion, a little too many support requests.

I’d like to see ‘diffs’, the before and after of new features.

As an example, a sort of proof of concept, I’ve put together a side by side from a new, rather major update from Evernote - thank god they shipped something!

I’m not sure what the best format would be. Maybe a gif, or the NYT slidey thing?

Within the new release, which included several changes, I focused on the update to the new note button. It caught my attention because we had a similar interaction for myfitnesspal, a big plus button that opened up a secondary menu. I thought this was an interesting solution. Text lablel and more physical space for the note button, but also allow users to jump straight to other note types with one tap. 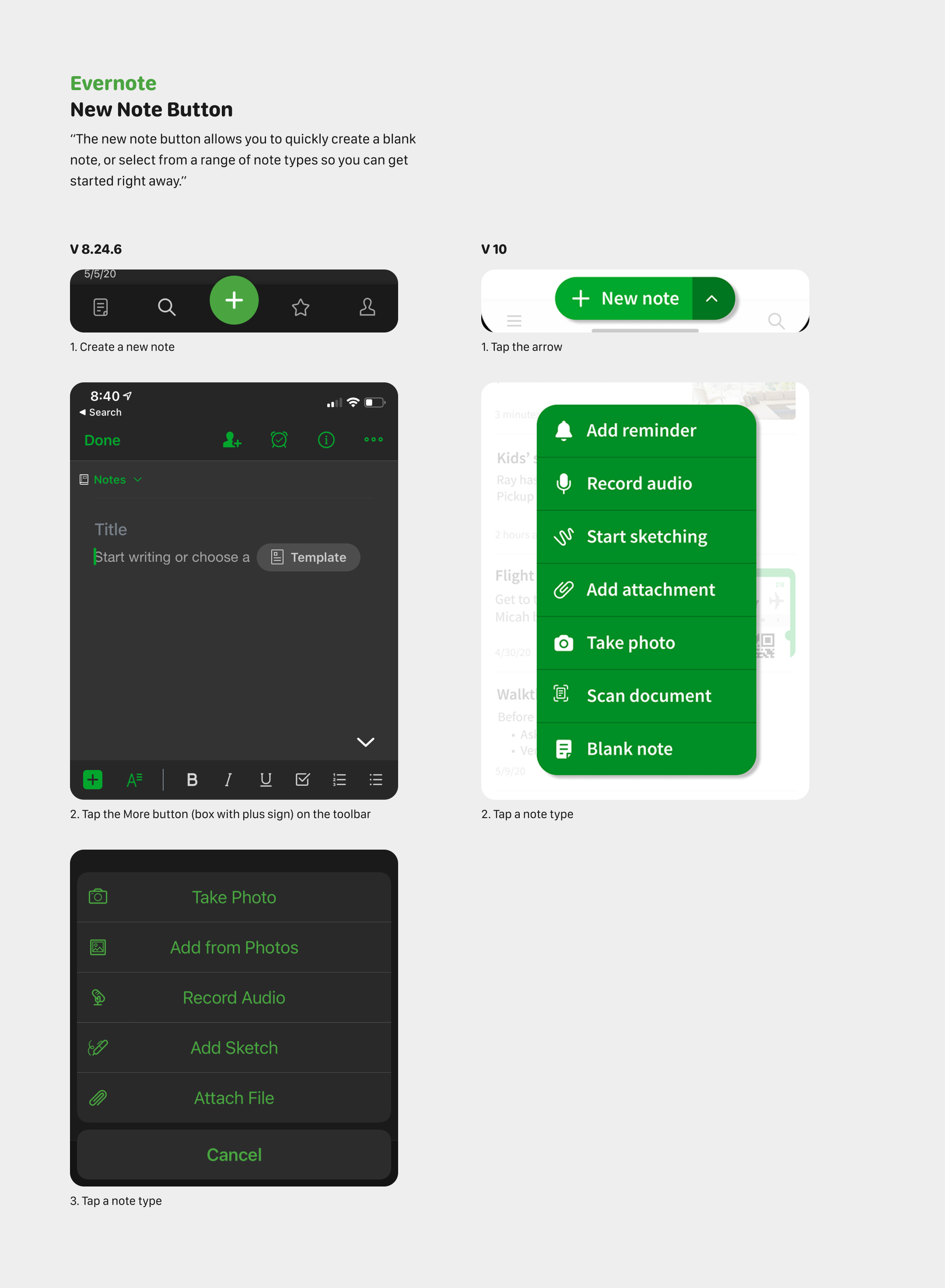 Did you know about the fabulous OpenSFHistory, a repository of scanned images donated by a private collector who was active “from the 60’s through the early 2000’s”? It’s a time sink.

I’d usually rather wipe my eyes with mud than trawl through old photos. You’re unlikely to come across any creativity, interesting composition or subjects in a city photo archive. But two things struck me as I browsed. 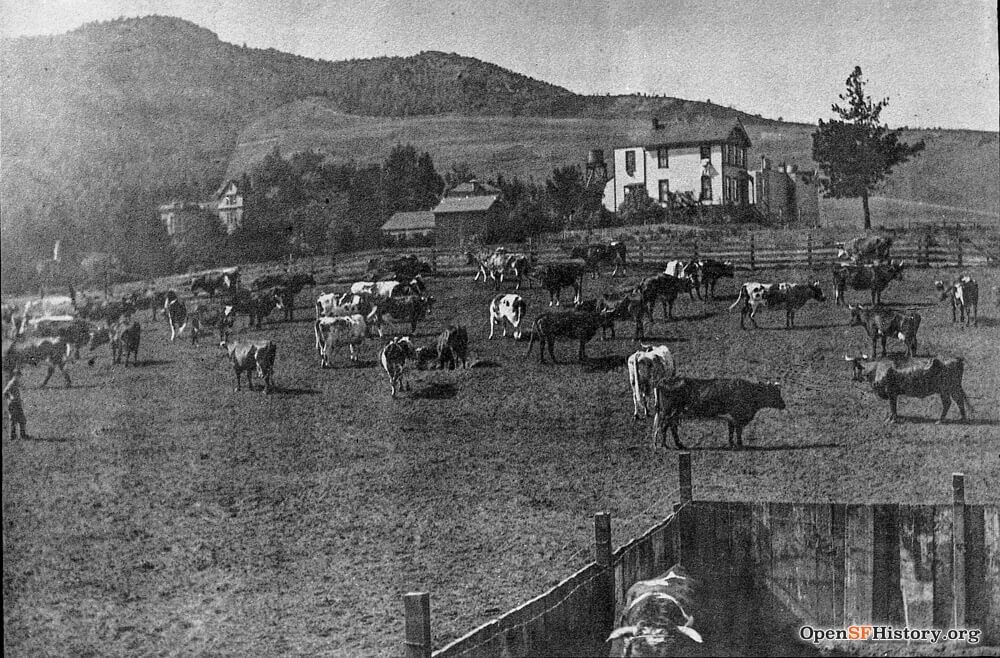 First off, Cole Valley in 1894. Over 120 years ago, a large swath of San Francisco was for cows. No cars, no airplanes etc. What astounds me is how much the world has changed, and honestly in such a short space of time. 120 years, my great grandfather was still alive. 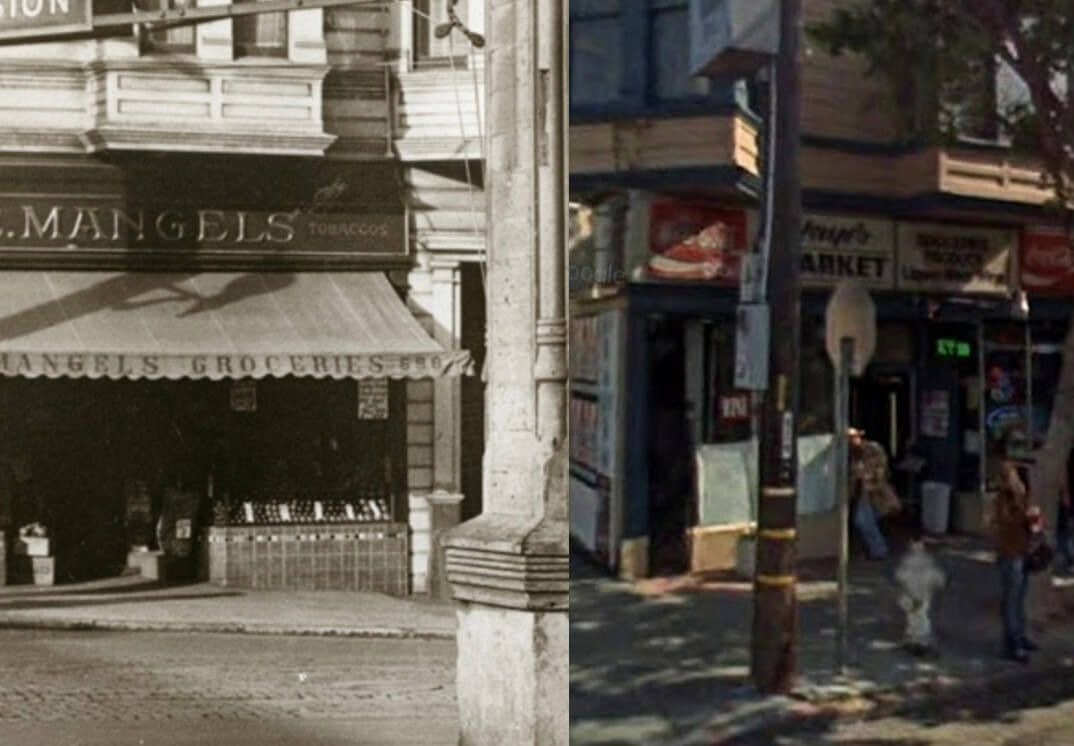 But some things never change.

The Magic Of Magnifying Your Passions

Interests. Things you geek out on. Stuff that sparks your interests. Hobbies, groups, clubs, causes, facsinations. This is where we spend our spare time. Our spare money. Where we pour our energy. This is where many of us find meaning, make memories, lifelong friends and maybe after enough time, mastery. What’s interesting is when these interests get magnified. Whether it’s by repetition, setting big goals or getting super specific, something small like a passion for hot sauce can explode into a businesses, a community, fans or even fame.

When you visit a city, most people go and see the sights. In San Francisco, the most visited attractions are Pier 39, Golden Gate Bridge and Golden Gate Park. Tourists tick them off a list. There is not much depth to this approach, but you get to see some beautiful things and maybe a better feeling for what the city is about. But a far more interesting and effective approach is to layer in your interests and then hammer with repetition. A friend of mine, Angel, had recently moved to San Francisco from New Jersey. He grew up eating some of the best pizza in the country, and wanted to sample what San Francisco had to offer. This was his way in. He started an excel sheet for every pizza he tried, ranking and rating the slices on many dimensions. This approach is not exclusive to pizza! More importantly, the pizza took him all over town, from North Beach to Noe Valley. After a few months, locals were asking him for recommendations.

Don’t just go for a run, run every street. Go big. Another friend, George, was into fitness and cycling, and he set an audacious goal, 5000 miles in one year. So every day, he needed to hit a target of about 12 miles. This forcing function meant he was suddenly crossing to the other edge of town, just for an ice cream, and to get those extra miles. Getting him out of the house even in bad weather, and stumbled on sights and places he’d never would have crossed otherwise.

In management, “T-Shaped” people have both the enthusiasm and ability to collaborate across a variety of disciplines (eg. Marketing, copywriting, selling) and have a ton of expertise in a specific skill, like design. Magic happens with scaling up your goal, but also by going deep in a particular area (the vertical stem of the T). I have a feeling this approach to life is distinctly Californian. There’s something in the air here that lends itself to obsessively hacking, in the most good natured way possible. Like the best way to cook a soft boiled egg or tofu, it’s a never-ending quest for perfection, or ‘better’, whatever that might mean for you. From the outside, this could be seen as neckbeardy or nerdy. The quantified-self movement is generally seen as a bit of a time waste and too self-centered. But because ‘going deep’ is more of a system rather than a goal, it means you can keep doing it forever, and it will keep generating interesting results.

Dolphins, Icebergs & Every Person in New York: Impossible Is The Goal

In San Francisco, I found a love for open water swimming. It was freezing, often below 10 degrees celsius. There were mischevious (and smelly) seals to maneuver around. But there was an amazing culture and community that had built up around the clubs, like the Dolphin Club, one of the oldest athletic clubs in the West. I didn’t expand on this hobby much more than turn up occasionally for Sunday swims, or complete one off events like a swim to Alcatraz. Over in Brighton, Australia, former premier Ted Baillieu took open water swimming one step further. He decided to swim every Brighton Beach in the world. It’s likely that he’ll never get around to finishing this quest, but it will take him to incredible places, and provide endless stories and memories. That’s the point. Jason Polan probably knew deep down he was never going to draw every single person in New York.

Another way your hobbies can spark magic is by connecting and sharing them with other people. To do so, it’s important to think about how practical and accessible your interests are. Collecting expensive wristwatches is a game most people can’t play. Burgers – everyone in America has an opinion, recommendation, recipe or idea about that. You’re more likely to have overlap with friends and strangers, and more chances for serendipitous moments. It’s also common to see subject matter experts and leaders share useful resources. San Francisco based cyclist Sweet_UX shares bike camping site reviews and map of all hiker/biker campsites in California.

Kevin Kelly: Most Interesting Man In the World?

I can think of no better person who typifies this systematic approach to passions than Kevin Kelly. KK gets very specific. He doesn’t blog about ‘travel’ or ‘technology’’ he blogs about “Ways in which people modify and re-create technology”. He repeats and repeats. His newsletter Recommendo gives 6 recommendations a week. Every damn week. It’s only been around for a few years (or 200 issues) and it has 37,000 subscribers. He does big stuff (rides across America), and also shares a free zine guide for anyone who’s interested – most of his stuff is completely free.

I’m guilty of staying at the surface level. It’s safer there. It can be tough to get specific, or deep. It can be scary to share what you’re doing, to reach out to strangers and ask for advice or invite someone to do something. If you’re going to really ‘know’ something, you’re naturally going to fail at it, a lot. But when you do start to magnify, magic happens.

“You don’t own anything, and you’re not going to own anything. Why do you think it’s so expensive in Silicon Valley and New York? …. You are 20% behind. People in their late 20’s. 20% behind their parents generation. And the gaps only going to increase as far as wages go. You don’t own any assets. Only what’s passed down. Nothing that you earn yourself. You can’t save because it’s 0. You can’t buy a house. The number 1 problem with family formation in the 20’s and 30’s is economic anxiety. People don’t feel they can have a job they can depend on. I talk to people in the middle class all over the world.. They all understand something. They’re two paychecks away from oblivion. They don’t really have a stake in the system. They’re two paychecks away. And when they turn 50, it gets even worse.”

I was probably 10 years old, the first time I flicked through a Weekly World News.

I would have been visiting the States, on a family vacation. And like many things I encountered on those trips, Captain Crunch cereal, Nickelodeon, Ice Blue Game Boys, it completely fried my brain. American culture was simply too weird, wonderful and powerful for my delicate senses.

Browsing through a newsstand today, still gives me a bit of this high. The photography, typography, copywriting, and personalities oozing from magazine covers.

“Our mantra was,”Never talk yourself out of a good story.” If a lady called and said aliens ate her laundry, The New York Times might say, “Do you have evidence?” We’d say, “Oh, do you know if he liked jeans or frilly stuff best?””

Thinking about increasing, or decreasing the amount of food you eat?

Before you do, it’s helpful to know how much energy your body is using every day. We can call this total energy.

It’s easy to find out your total energy # with online calculators or apps like myfitnesspal. But if you own an Apple Watch, you have access to much more accurate data.

To find out your total energy, you need to sum your Resting Energy and Active Energy, two stats that Apple Watch tracks.

But first, a few definitions.

Resting energy: Your body uses up energy no matter if you don’t exercise. Breathing, thinking etc. Your resting energy expenditure is roughly 60 - 75% of the calories you burn in a day.

Active: This is what most people think of when you Mens Health says “torching calories”. Everything from walking your dog, household chores to throwing down a triathlon.

For me, on average, the total energy my body is using every day is about 3300 calories.

The easiest way to find these stats is in the “Health” app on your iPhone. You can see daily, weekly, monthly and yearly averages for both. 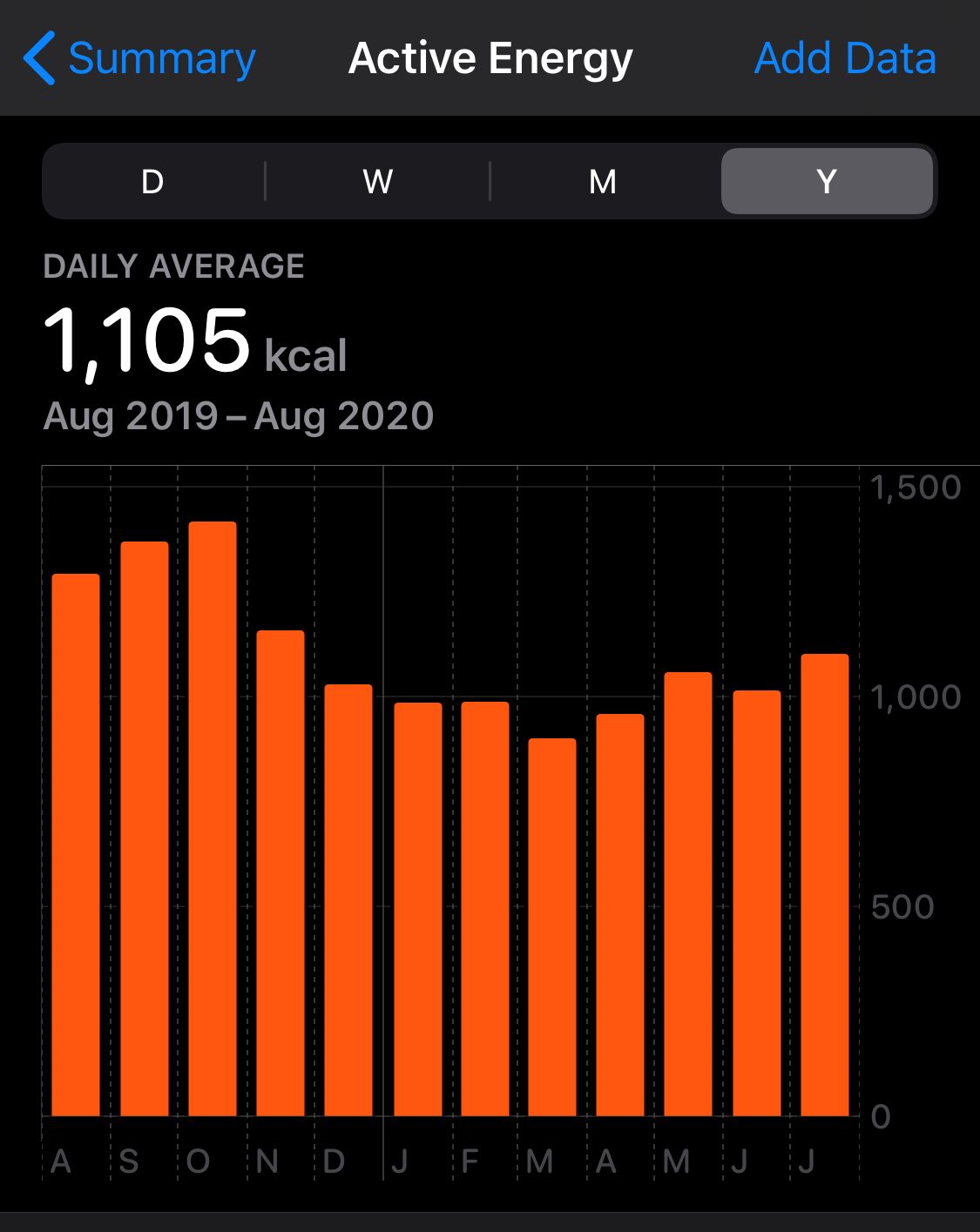 Once you’ve had the watch for 6 months or so, check your averages, sum resting and active energy and you’ll have a really clear picture of your total energy.

And if you want to lose weight, it’s as simple as consuming quite a bit less than that number.